Covers the ride to Aid Station #3, including the stop at #3.

Tony was driving now, so I’d have to forgo for now Bruce’s astute advice on setting up trusts [I had really broached the subject first, so you can’t blame him]. We were headed to Aid Station #3, in Oceanside. This was our lunch stop. The truck, driven by Ryan, was already on its way there to deliver all the food.

Tony and I bypassed the Camp Pendleton route taken by the riders. Soon we received a call from Jay LaRiviere, who’d broken a spoke and was in desperate need of a wheel. Tony had a brought an extra set of wheels, so Jay was in luck. Jay was waiting for us at rest stop #3 (lunch). His breakaway partners weren’t likely to wait long for Jay. Could we hurry?

We laughed, because we knew that Jay being left behind by his break-away companions would be a source of great consternation for Jay. [Sorry, Jay, but you understand. It’s a ride, not a race, right?] 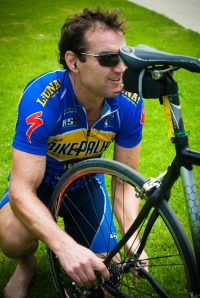 Five minutes later Tony gets another call. I laugh and say it must be Jay wanting to know where we are. It is. [Jay now claims it was 20 minutes later.]

I found out later that Jay, broken spoke and all, had dropped Mark and Francisco as they’d approached the lunch stop.

Lunch was at Buccaneer Park in Oceanside. When we arrived Jay pounced upon us to swap out his broken wheel. Minutes later he was gone, chasing Mark Abercrombie and Francisco Figueroa.

By this time my video battery was gone, so I shifted over to still photography.

The park was really nice; a great place for the riders to take a break. Lunch had been prepared by Lisa’s Bon Appétit in Torrance. It was great! I grabbed a chicken salad wrap, hoping that it was tuna fish. I was a bit surprised with how well it tasted (I’m not always a big chicken salad fan). The box included macaroni salad, grapes and a chocolate chip cookie. It really hit the spot. 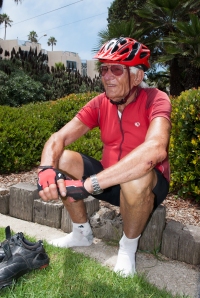 Remember the rider who’d left San Pedro at 5:30AM? 83 year-old George Gabric had given himself an edge by leaving for San Diego 90 minutes earlier than everyone else. He was there at lunch when we arrived! He seemed well rested and quite relaxed and talked about how little traffic there was when one leaves at 5:30AM, instead of 7:00AM.

One rider came in and reported that Cecil Campbell had stopped riding a few blocks from the lunch stop, reportedly saying that he’d “cramped up all over.” Given how Cecil looked at the last stop, I was concerned. Tony went out looking for him to no avail. We tried calling him on his cell—no luck. We called his wife to make sure that we had the right number for his cell (we did). Tony went out again looking for Cecil.

Tony had asked me to ride with Ryan in the truck for the rest of the trip to San Diego, hoping that I’d help him load bikes into the truck. Ryan and I waited for the riders to finish eating, then we cleaned up the lunch site, got in the truck and headed towards San Diego.

To see more pictures from the ride, select this.